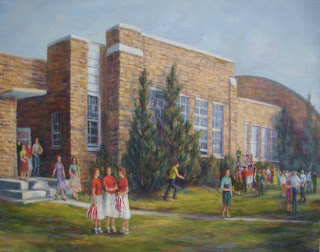 I changed a few things in this painting such as the direction two of the three figures were facing, added the semblance of a hand to the figure on the viewer's left, and worked just a little some of the other figures and the grasses. It looks so much better in real life, I think. 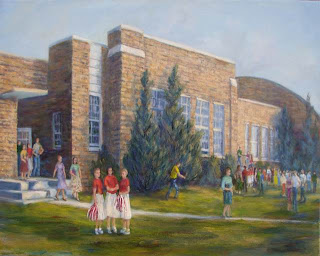 The painting has had a coat of acrylic medium put on it and is now on its way to have a frame chosen for it. The next step will be to varnish it. I may look at the foreground figures a little more though before varnishing. The one figure looks so stiff and perhaps it would be better to have her facing the other two figures. I'll consider that before putting on the final varnish.
Posted by Ann Buckner at 12:16 PM

Well done! I hope you're happy with it :)

Welcome back from your trip Rhonda! Thanks for commenting too. I like parts of the painting but my twin likes it so that is the most important part as it was painted for her. The figures look stiff to me and not as painterly as I would like. To say the least, it was challenging.