I reworked the orange slices which was originally painted in February of this year. First, I oiled the surface, then lightly wiped off the oil. Next, I removed the one little orange slice that sat on the half orange, removed the slice that was behind the front/center orange slice then added the orange peel. I was trying to be more conscious of brush strokes, both in direction of the stroke as well as thickness/texture/or lack of texture of the paint being laid on. Notice that the subjects go off the edges on three sides and that the light is oblique or angled to create more interest. I think this latest update of the painting says much more than the original painting done in February, don't you? 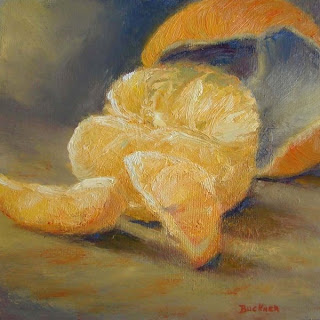 This is the painting done February, 2008. 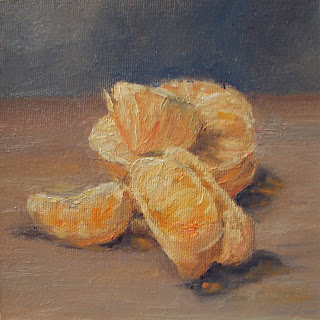 Your newer painting is so refreshing and looks like it was done with confidence. beautiful.

Much better composition and light on this one, Ann :)

Thanks for the confidence building Rhonda and Sandy. :)

Okay, lol, I'm the odd (wo)man out. The new one is beautiful but I loved the light brushstrokes on the first one! Though that peel looks pretty awesome! Great stuff, Ann!

I'll reply to your other entry tonight - I just raced home for a fast lunch and need to go back to work now. Thank heavens it's weekend. Almost.

I think it's great that ou shared what you like about both paintings so no odd (wo)man out! For me, the appeal in the reworked painting has to do more with weight or dominance and its composition. In the original painting I like the little orange slice.