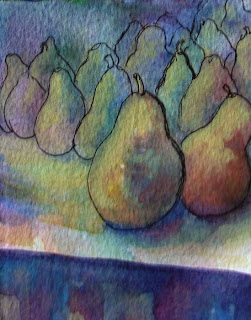 colors as I did in the little color study below. In the pears though, I let the colors merge more, beginning by placing the cool yellow then dropped in the Rhodonite Genuine (pink). In this I also used Ultramarine Violet plus the other colors mentioned below. I hadn't ever used a waterproof, acid-free ink pen to outline so I did it with this little play piece. Initially the painting began with two pears and then they grew and grew ha ha.

Using more scrap wc paper, 2 1/2" x 3 1/2", I played with color with absolutely no idea where it would take me. I layed in the warm and cool yellows (Nickel Titanate & New Gamboge), then the Rhodonite and Quin. Magenta (pinks) then cobalt blue, all laying more or less next to each other as the colors came down the paper. Then came the pthalo green, with touches of tranparent red oxide. There are blooms or blossoms, moved paint with the handle end of the brush and just played. 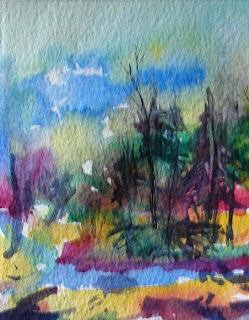 Mine of course doesn't look anything like the video of Stephen Quiller painting that I had watched a few days ago at artistnetworktv.com. But just splashing, dropping and moving more intense colors around has been fun. The colors in the photo don't show as chromatic and intense or the sharper contrast as it actually is in real live.
Posted by Ann Buckner at 3:10 PM

Ann, of course your work doesn't look like Stephen Quiller's - it looks like Ann Buckner's which is pretty darned good!! Love them both - like the symmetry and the look of lemmings getting ready to jump off the edge of the pears and love the looseness of the landscape. Well done! Glad to see in the midst of all the rewiring upheaval, you can paint something small and so lovely!

Thanks Rhonda. You see lemmings lol? It is great that you have such a good imagination!

Love these. Especially the lower one.

Thank you very much Mary! :)