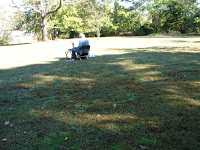 Ken is beginning a new painting. The sun was so bright my camera bleached out the grass in the sunlit areas. Note the gorgeous tones in the foreground grass. 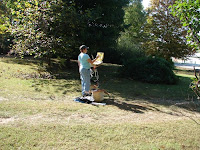 I'm walking toward the next painter who is concentrating on capturing the view in front of her. She is using a Guerilla Pochade box and the easel is one of the sturdiest I've seen. 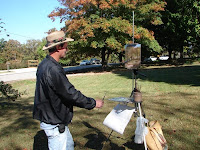 Ken has blocked in the scene before him and did a terrific job. I could tell he has painted plein air before as he didn't waste any time in getting the scene down on the canvas. 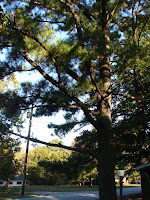 This photo of the light shining through the pine tree captured my attention before class. I was in awe of the way the light filtered through the needles and the beautiful color. The worst part was the crick in the neck from looking up for so long. 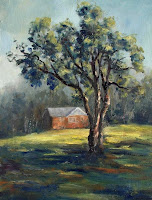 The photo of my plein air finished in class Saturday, was taken Monday in full sunlight. I had been taking photos in the shade but Tim suggested taking them in full light.
I took in the British Columbia Lodge painting for Tim's review. He suggested adding some of the green that was on the hill side as a break in the trees above the roof of the main lodge building. Another suggestion was to put more wave movement in the water near the plane.
Posted by Ann Buckner at 4:58 AM

Wow Ann, your painting looks gorgeous! I love the way you incorporate blues into your paintings. I'm glad you're still going and enjoying classes!

Thanks Deb! It is actually mine and Tim's painting as he shows what he is wanting us to learn with brush strokes on the painting. Thank goodness he is patient!