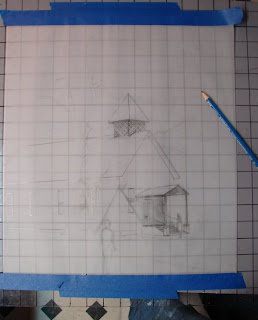 The grid method was used for this drawing. I took the photo into Photoshop and placed grid lines 1" apart. Then using a 20" x 26" 1/8" plexi-glass which has black lines drawn an inch a part, I taped the tracing paper to the plexi-glass and began drawing. In the top photo, you can see how well the grid lines show through. My first lines were picked from the bottom left edge of the church. 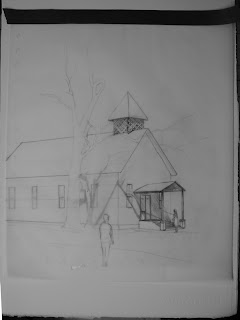 After I finished the drawing I placed the tracing paper on top of a half sheet of 300# watercolor paper so the drawing could be seen better while I photographed it. In the photo it appears as though the church is at the half way mark of the paper but there is at least another two inches of paper above the blue tape that isn't showing. Also, I will have the doors open I think, to indicate more of an open, welcoming look.

My next step is to transfer the drawing of 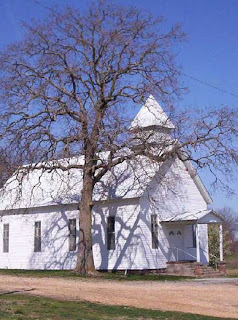 What interests me about the photograph of the church are the beautiful, graceful shadow patterns cast by the tree onto the church. The other factor that interests me is the history behind the church built by the Cherokee Indians at the end of the Trail of Tears.
Posted by Ann Buckner at 5:29 PM