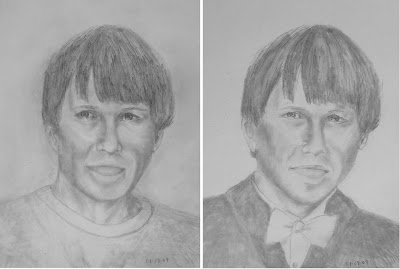 You can in the comparison photos of the sketches see what has been reworked. I decided to do that instead of beginning a new drawing. By doing these reworks, it makes me more aware of each feature. I've found when drawing I always start with the eyes. So don't be surprised if you see some eye doodles, both in graphite, watercolor and oils.

In the reference photo I used, Brian's eyes were closed a bit more but I wanted them open in this sketch. It also looks like he has a heavy beard in the rework. Hopefully the next drawing of him will resemble him more. He is such a cute teenager. You will note I took off the tuxedo and replaced it with a tee shirt. This looks more like him but still isn't quite there yet.
Posted by Ann Buckner at 5:37 PM