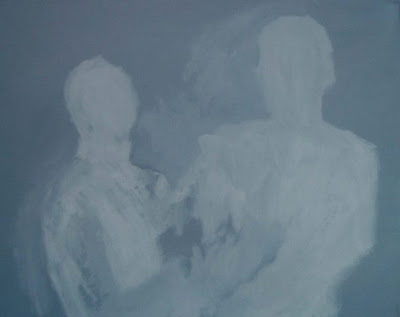 I was hesitate in posting this but thought "in for a penny, in for a pound" and perhaps someone could benefit from what I am doing. The benefit may be what to do or what not to do. I could have started this portrait with a charcoal drawing but decided to draw with the brush.

I began the painting yesterday on a 16" x 20" canvas. I primed the canvas with acrylic gesso and let it dry. Next, a mix of French Ultramarine Blue, Burnt Sienna and gesso, to tone the canvas. When that dried, the gray mixture was lightened and used that to position/place the figures. This dried for at least 24 hours.

In the next photo I begin the blocking 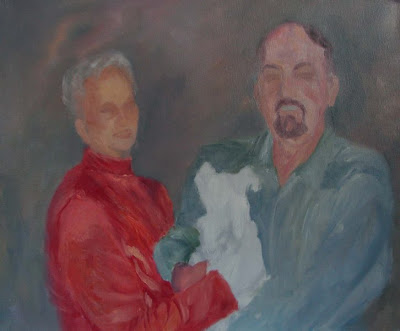 in process using Alkyd oils. I have to rework the size of Sharon's head as it is too narrow and a bit too small, change a couple of shapes in Robert's forehead as it looks like he has a dent on the right side and indicate his hair line a bit better. Plus, I have to block in Coffeebreak, which is their dog that died last year.

The red is showing very saturated in Sharon's top while the lights have created a glare on part of Robert's face.
Posted by Ann Buckner at 2:49 PM