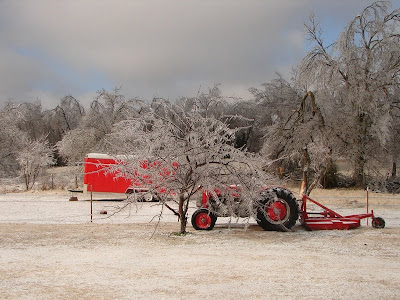 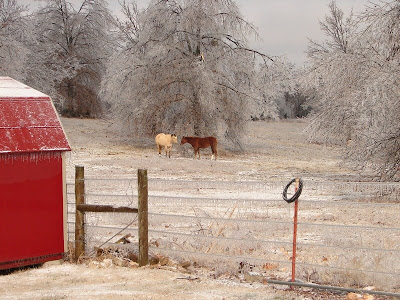 Power came on at 7:40 a.m. this morning after being off since 1:00 p.m. Tuesday. Nothing like camping out for a few days. Happily we had gas heat and running water. The food in the refrigerators and freezers is ruined but no damage to the house at all that we are aware of at this time. Some people in this area were not as fortunate.

Mom basted quilting blocks by kerosene lamp and listened to books on tape and music. My sister and I spent our time reading by flashlight or candlelight. Now I know why farm folks lived by early to bed, early to rise. 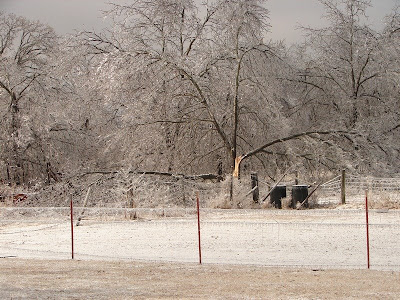 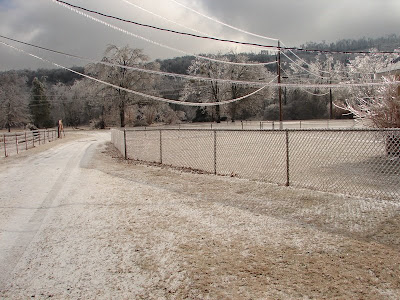 The photos taken Wednesday don't truly catch the amount of ice on the trees and wires as in real life it looks like an ice fairy land. Happily that day the sun shone just for awhile. By Thursday most of the ice was gone and by Friday there wasn't a trace.

We are blessed as it could have been so much worse. Our thanks to all those workers at the electric company, the highway crews and those clearing limbs and debris. My small hometown, suffered so much more damage than we did, even though we were without power longer. 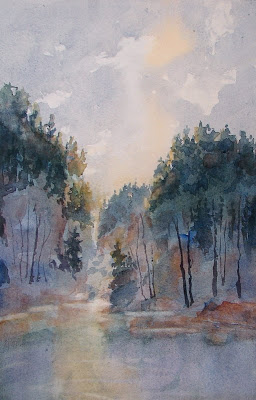 I did begin a small watercolor painting but didn't finish it as it took so long to dry. I noticed too, along the banks of the water how it looks curved even though they are actually straight because the paper curled when it dried so it needs to be flattened.

Now to catch up on what has happened in the rest of the world.
Posted by Ann Buckner at 8:58 AM

glady your power is back on Ann, and I like your painting!

So glad you survived without having to head to a motel or get in trouble with kerosene heaters, etc., Ann - and I love this painting - don't touch it again - it is beautiful as is! Now try that field with the red tractor - it's just calling for you to paint it!!!

Thanks Rhonda, last week had its "fun" moments. I am most happy you like this little landscape painting, even though it isn't finished. That is a neat photo of the red tractor. I'm not sure whether I will try painting it though.

So glad you are all safe and warm now. I remember 9 days in an ice storm in the 90's without power - but we had a kerosun heater to cook on and heat with. To this day, I can't stand the smell of them. Sure makes us appreciate how easy we have it. Keep warm and keep painting.

OMG, Sandy, nine days!!! It does makes us appreciate all we take for granted. It is so lovely here today and suppose to reach 61F; so different from last week.