Chatter & From the Archives 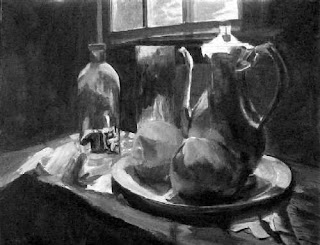 From the Archives
Grasaille Underpainting
Acrylics
I did paint with watercolor this weekend but the reference used was for a specific online challenge and to be used only for that challenge so I won't share it.  it was a 2-hour challenge which is loads of fun.  The painting turned out a mess but I thoroughly enjoyed painting with reds, yellows and greens (mixed from blue and yellow) and lots of messy drips.

The main reason for this post is the armchair traveling to Fabio Cembranelli's blog which is always pleasure to view.  Fabio then gave us a link to his interview done for Konstantin Sterkhov’s blog.  It was wonderful reading and the paintings were a pleasure to view.  After reading the interview I went on to look at more of Mr. Sterkov's blog.  I thoroughly enjoyed it and his artwork.  Definitely a blog to visit.
Posted by Ann Buckner at 8:40 AM 2 comments: 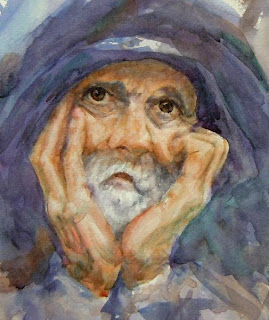 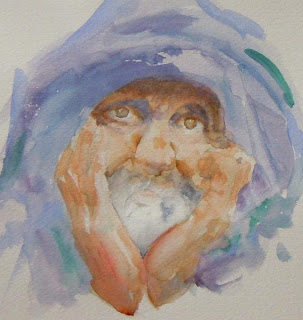 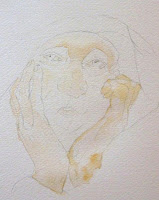 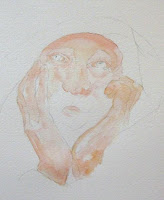 Before starting this painting I spent time procrastinating while I mulled over the colors to use, then I did swatches of those colors; glazing over colors, pre-mixing colors, adding complements to gray the colors and perhaps use as shadow colors.

Using a black and white reference photo by bboomerindenial from morguefile.com, the sketch posted earlier was transferred to a 1/4 sheet (11" x 15") watercolor paper.  The actual image size will be approximately 6" x 6 1/2".  This morning a first layer of yellow ochre was applied leaving some white areas for the lighter value. 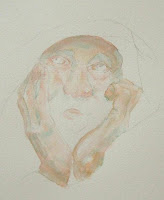 The second photo shows a layer of quin rose applied over the yellow ochre while the third photo shows where viridian was brushed in.  I didn't mentioned earlier that these layers were applied wet on dry paper.

I guess I'm looking for a formula where to put certain colors in the face.  Should the shadows around the eyes be more purple/blue or is there is some green.  What colors to put around the nose and the sides of the face that are in shadow.  I don't know if they would look better purple, bluish, or greenish or warmer tones.  I have always heard cool light, warm shadows and vice versa.  I've read where the inside of the nostrils and the mouth are warm looking.  So is it a matter of playing around and just adding color willy nilly until I come up with something I think looks good?    I think so, because that is the only way it will soak in until it becomes a subconscious choice.
Posted by Ann Buckner at 9:09 AM 3 comments: 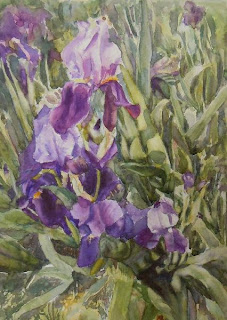 Iris
8" x 11"
Watercolor
This painting is pretty much completed.  I will let it sit for a couple of days to see if there are areas that need tweaking.  One thing to note on this painting, where the petals look more blue they are actually more of a reddish cast with just a hint of blue.  For some reason, my camera is really emphasizing the blue tones.  Photographed in natural light.  Thanks for staying tuned to the work in progress.  As always, your comments are appreciated.
Posted by Ann Buckner at 10:59 AM 7 comments:

The first photo shows yesterday's progress from the previous session shown in the second photo.  Still much more to do and refine, lights to be lifted with a few more darks to be placed.  I like the light, airy look in some areas of the 2nd photo.

Edited this post after reading all the great comments.  I truly had a chuckle over my memory mess up.  Of course I knew they were iris but must have had lilacs on the brain.  Thanks all of you - hope you had a good chuckle too.
Posted by Ann Buckner at 8:25 AM 5 comments:

Finally feeling up to painting after a bout with the flu.  This is today's progress. I've found I can only work on this so long a period of time as the leaves get even more confusing.
Posted by Ann Buckner at 2:40 PM 6 comments:

Slow progress on this one simply because I've fallen prey to the flu.  Happily, I am feeling a bit better and would like to paint.  Whether that actually happens remains to be seen.  There is lots of clean up work to do in this painting,  lightening areas, smoothing edges, etc.
Posted by Ann Buckner at 7:32 AM 6 comments: 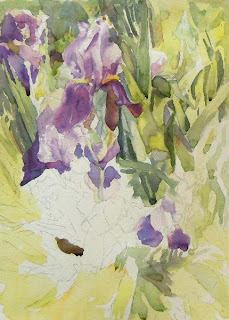 A little more painted this morning.  The leaves get very confusing.
Posted by Ann Buckner at 12:40 PM 6 comments: 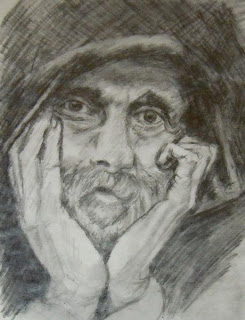 A graphite sketch on tracing paper of an old man which is the subject for the portrait group.  The reference photo is from morguefile and the photographer is bboomerindenial.
Posted by Ann Buckner at 11:02 AM 3 comments:

I tried something different for me, placing a wash of Azo Yellow along the outer parameters and adding New Gamboge in areas. Then glazing blues or mixes on top of the yellows.   Sometimes it works, sometimes I have to mix to get the green I'm wanting.  The colors for this painting are Azo Yellow, New Gamboge, Quin. Rose, Quin. Violet, Cerulean Blue, Cobalt Turquoise, Cobalt Blue, Pthalo Blue, French Ultramarine Blue, Indigo Blue, Carbazole Violet.  The blues are for mixing different greens and some of the purples.
Posted by Ann Buckner at 7:14 AM 7 comments:

A Tracing Ready for Paint 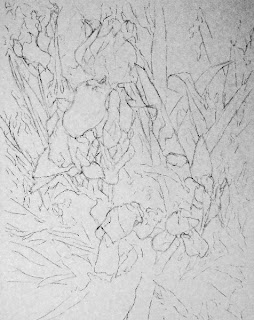 It took quite a long time to get this traced on to watercolor paper.  It looks a bit of a jumbled mess doesn't it.  The lines will be lightened with a kneaded eraser leaving just enough to find the individual shapes. 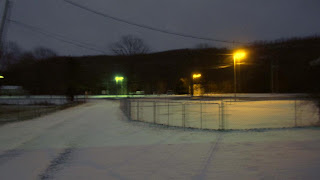 We had our first snow fall last night although the ground is barely covered.  Still it looks lovely and pristine.  Very little traffic on the highway so that means the roads are slick.
Posted by Ann Buckner at 8:55 PM 2 comments: 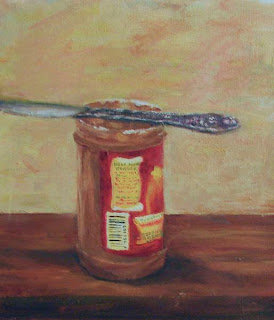 I'm calling this acrylic study finished as I am ready to go on to something else.  One thing to note when painting is the lighting.  This was painted under warmer bulbs so when it is viewed outside it doesn't look as saturated, especially the background.  So it is always a good thing to pay attention to the lighting and try for the best natural light one can get.
Posted by Ann Buckner at 11:12 AM 1 comment:

Email ThisBlogThis!Share to TwitterShare to FacebookShare to Pinterest
Labels: acrylics 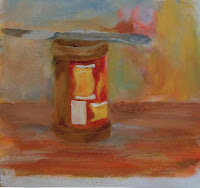 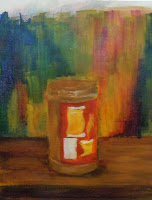 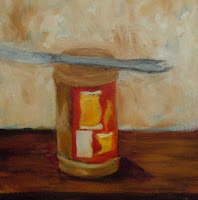 The photos above represent the transitions this acrylic painting has gone through.  The last photo shows where I stopped painting last week.  All three photos have such a different look.  The ellipses on the  peanut butter jar all need to be corrected as does the slant of the back edge of the table.

It has been intriguing to work with acrylics again.  It certainly is a good opportunity to think about brush strokes, direction of a stroke and how it will alter the look of the area; edges, where to have soft edges and which area needs a harder edge.  Then there is values to consider and which color would work best placed next to another color.  Which color will make that area sing and which color will act as a neutral or an accompaniment to the more intense colors.  The other thing about acrylics is how fast they dry and how they darken when they dry.  I'm learning a lot about dry brushing to help soften an area and have found it challenging to create a sharp edge.  Now, after writing this, I am jazzed up to begin painting again.
Posted by Ann Buckner at 7:43 AM 5 comments: