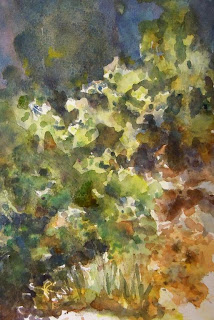 At paintingfriends.com we began a year of painting (YOP), one painting a month for 12 months.  The topic for the YOP this month was landscapes.  Two landscape photos were posted on March 20th and the paintings were posted today, April 20th.  Each month a new topic/photo will be posted.  The YOP is a great way is for each person painting to decide what their individual goals are for that month's painting.  Members are encouraged to do thumbnail sketches, notans, color swatches, planning their work before actually beginning to paint.

The photo above shows my 1st attempt at painting a bush with the light shining on it.  The photo below is my second attempt.  The same colors were used in both paintings.  The paintings are a failure in one sense in that they did not turn out as I envisioned.  On the other hand, I did manage to keep some whites and kept the "S" curve of the flow of the foliage.  The first painting has some good contrasts and values while the second painting has a softness that in some ways I find appealing. 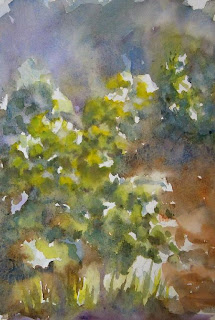 Below is the reference photo taken along a highway between my hometown and Joplin, MO.  Traffic was stopped because of an accident so it gave me a chance to study the light and shadow patterns on the trees and bushes. 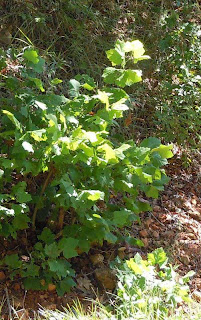 You did well. I like the info how these paintings came about, and what you liked/disliked about them. Helps others still learning. thanks.

Show that one should always bring a camera with them. I like how you captured the light