Instead of pitching this painting in the round bin, I decided to learn from it and keep painting.  The painting was posted at paintingfriends.com and they suggested adding darks and maybe a few more blooms.  I took their suggestions to heart and did just that after I soaked areas of the painting and removed loads of paint.  Next, a Mr. Clean Magic Eraser was used to lift some of the staining colors (reds and purples).   From there I decided where I wanted some of the flowers than began to paint the leaves.  I was trying to make sure to vary the colors as well as color temperatures (warm/cool).  Another point to be made here is that I didn't go back to the photo - I just painted what I felt was needed and tried to create interesting shapes, sizes and variations.  The last thing I did was to use small areas of darks to help connect the darks from side to side around the area of the main two flowers and in a few other areas to create a bit more interest.

The 1st photo above is the original photo of the painting taken in front of an East window.  It has too much of a blue cast and looked lighter than the painting looks under normal lighting so I took it into Photoshop.  I did a remove color cast so that the greens in the bigger leaves would reflect the warm tones.  Then I adjusted the blue by desaturating it a bit and darkening the value of the blue.  My camera takes bright photos so then I had to desaturate the whole photo an actually darkened the light, dark and medium values one or two clicks.  The changes are quiet minute but they did make a difference and at least looks a bit more like the painting.  Oh, the magic of Photoshop.

I may even decide to varnish this one to really make the colors pop.
Posted by Ann Buckner at 3:01 PM 1 comment: 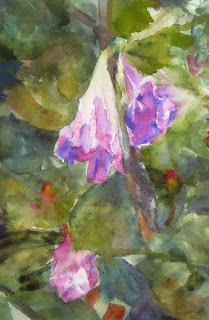 I'm showing this painting even though it is going in the round file.  I totally lost it and the more I painted, the more frustrated I became, which shows in the work.  So it is back to a clean piece of paper and try again to come up with something I like.  Thanks for looking!
Posted by Ann Buckner at 12:51 PM 4 comments: 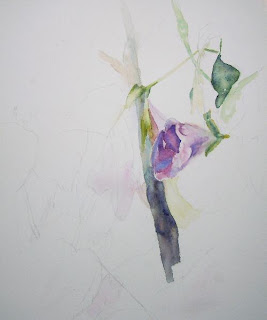 Hope you will tag along with me as I finish this watercolor.  Using a photo taken last Monday of Morning Glories that looked a bit shriveled in the morning cold air, I quickly sketched the general shapes of the leaves and flowers.

Using a palette of Indanthrene Blue, Cobalt Blue, Quin. Violet, Quin. Rose, Viridian, Sap Green, Quin. Gold and Quin. Burnt Orange, I began slowly laying in paint.  You can see from the photo how lightly the first layers are.  I wait until an area is completely dry before going back to work in more color or change values or shapes.
Posted by Ann Buckner at 5:14 AM 4 comments: