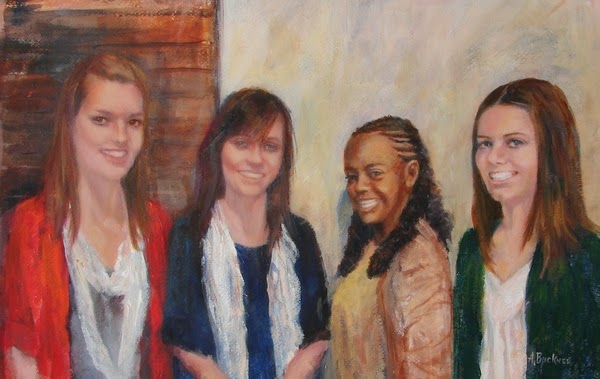 It has only taken almost two years to complete this painting.  It is a birthday present for my twin, of her four grandchildren that live in California.  Have one more grandchild to go then her present will be complete, hooray.  Of course, this is subject to her approval, so there may still be changes.  It is painted on a half sheet (15" X 22") Fabriano Aristico watercolor paper.
Posted by Ann Buckner at 3:26 PM No comments: 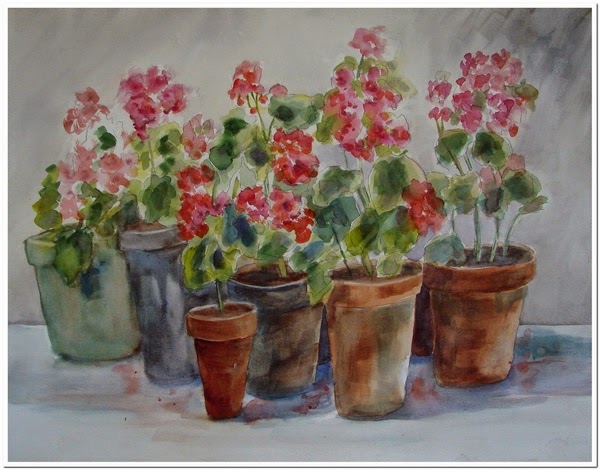 The photo doesn't look exactly like the painting but it is close.  Kay, perhaps in time, I might "get" this.  Thanks for the instruction and the photos.
Posted by Ann Buckner at 1:48 PM 1 comment: 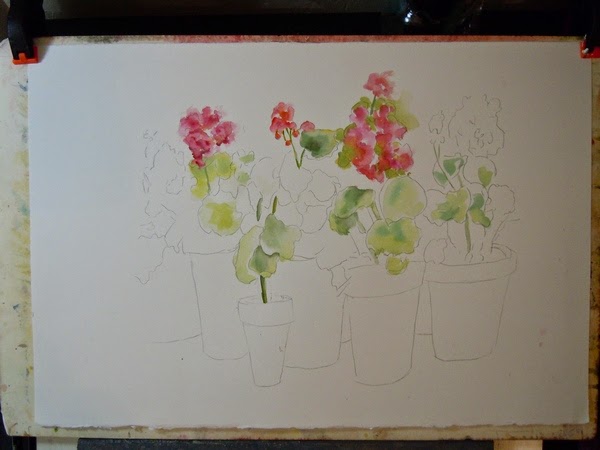 I made a start today, painting the geraniums demo'd by Kay Smith at Splash IV.  She made it look so easy of course. :)  The main thing to remember is slow down, look, look again then paint.  I forget that most of the time.  The painting is on Fabriano Aristico Soft Press paper, size 15" x 22".  I don't normally paint this large and I'm enjoying it.  Thanks Kay for doing the demo and so patiently answering questions.  I thoroughly enjoyed watching you paint.
Posted by Ann Buckner at 6:36 PM No comments: 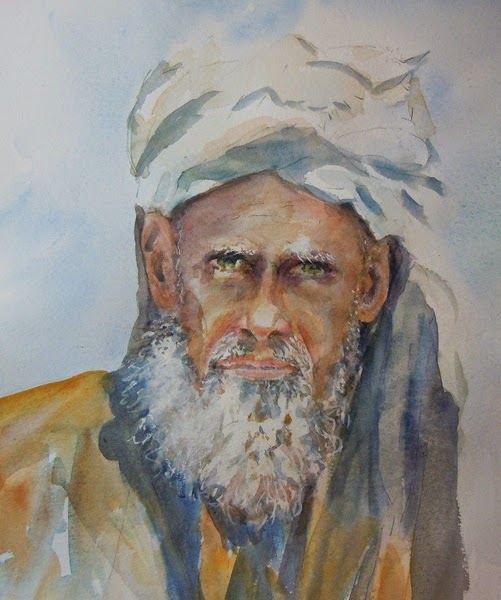 Think I'm calling this one finished even though there are problems with the right ear (viewer's left) and perhaps the angle of edge of the face.  It is painted on a quarter sheet Fabriano Aristico soft press paper.  I believe the reference photo was from Paint My Photo but I'm just not sure on that.  It was wonderful practice and I learned a lot painting this one.  Thanks Stephie.
Posted by Ann Buckner at 10:41 PM 2 comments: 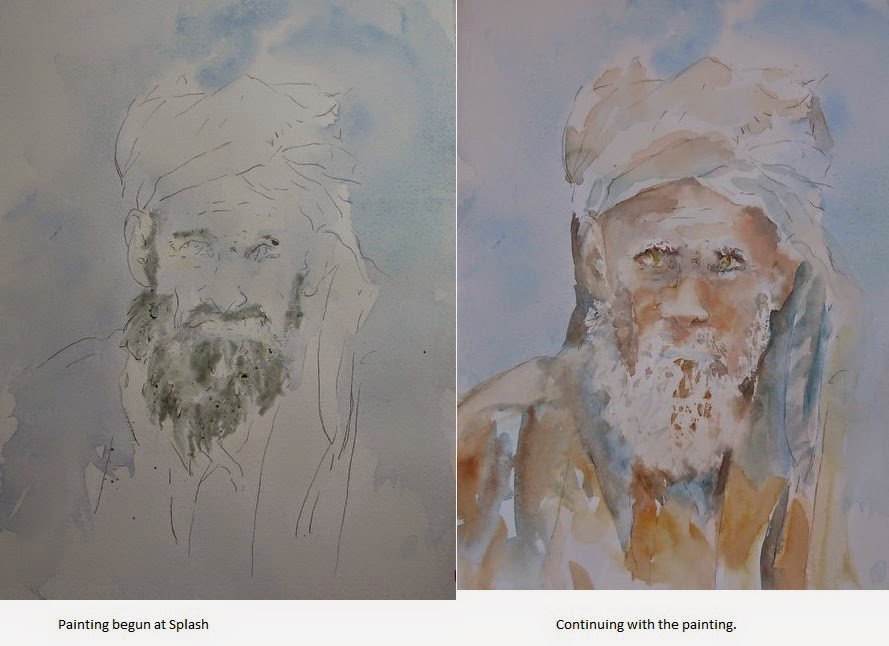 This painting was started at Indian Rocks Beach.  I can't remember where the reference photo is from.  If I find the information, I'll be sure to post it.  I had added Pebeo drawing gum to the beard, brows and by the ears, then painted a combination of blues in the background and across areas of his face. This weekend I began laying in skin tones and bringing those tones down into his garments.  Still a lot to  be done but just had to post that "hooray", I'm painting!!

Both me and the kitten are doing fine.  My forearm looks normal except for two puncture marks and a tiny bit of redness.  I'm so thankful it wasn't worse.

This next photo shows how much more was completed after I arrived home.  That is really a two way street but I made it a one-way because I couldn't get my vehicles to look right.  Have to do these things on the fly to make it work, yes? 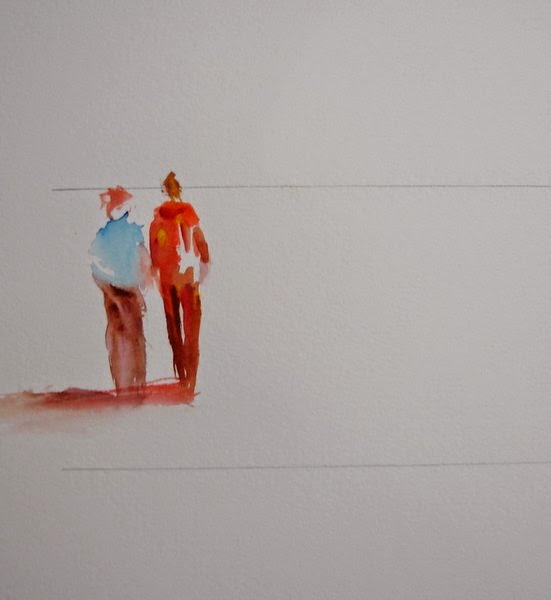 This photo of the child shows how the painting looked when I left Splash.  I was so unhappy with it.   I'm not sure where the reference photo came from.  It was provided by our demonstrator, Stephie, who did a terrific job painting this little girl. 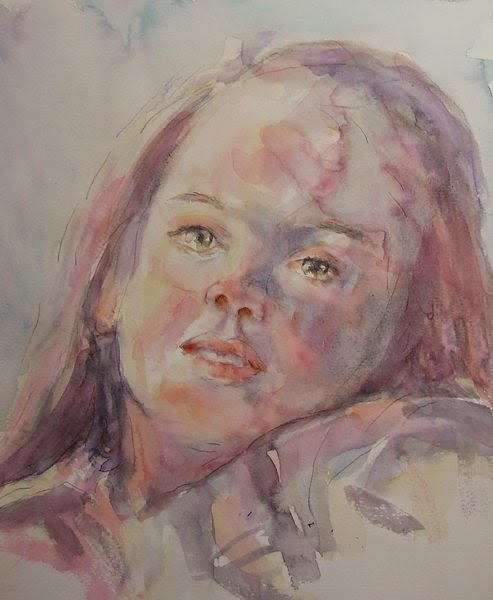 These next two photos, taken today, are actually the same photo except the second one has been adjusted using Photoshop.  I was so unhappy with the little girl's skin that I wet down her face and lifted/blended where I could.  It isn't a lot better but there are less hard edges which helps to keep her age to child level. 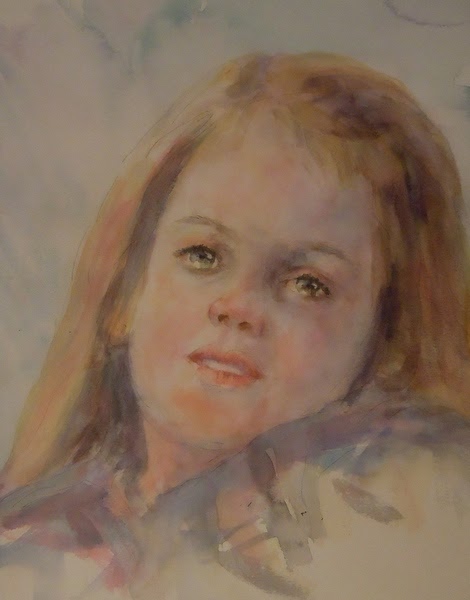 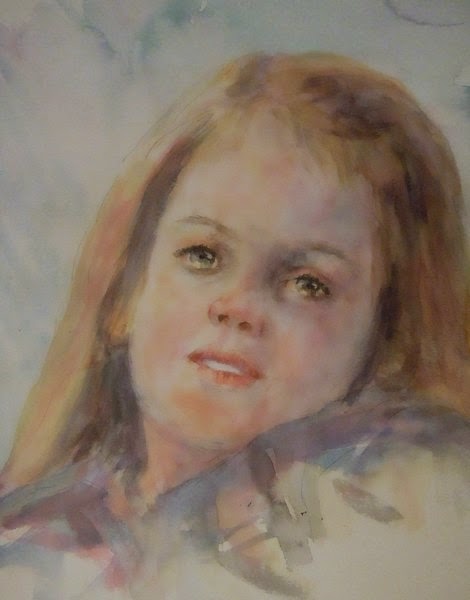 This pear painting was done after watching a Jacqueline Gnott video. I didn't go as dark or black in the background on this one but do want to try a painting that has that dark drama she is so good at creating.

I also caught a cold this week so have been sketching a bit.  I've been practicing holding the pencil a certain way, drawing thick and thin lines as well as drawing circles.  The object is to practice holding the pencil a certain way until it becomes an unconscious habit.  The first guy is just a figment of my imagination while the second figure is my attempt at drawing Tom Colicchio of Top Chef.  I will use him again as a reference because he has an interesting face. 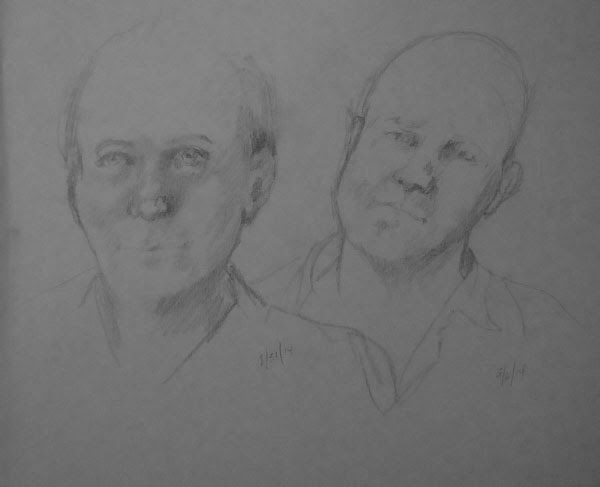 That has been my week of painting and sketching.  I have an old man, a floral and an animal still to paint from the week at Splash.   Hope you will stay tuned.
Posted by Ann Buckner at 7:43 PM No comments: